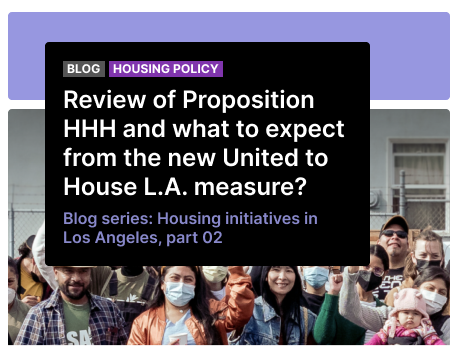 Review of Proposition HHH and what to expect from the new United to House L.A. measure?

Housing policy initiatives in Los Angeles (part 02)
A new grassroots movement by homelessness and housing experts has been rapidly growing in LA, aiming at tackling the housing shortage and the homelessness crisis through a new measure, and by turning to innovative solutions in construction and development management.

Five years have passed since proposition HHH, a landmark bill aimed at tackling the Los Angeles housing crisis was approved. The bill issued $1.2 billion in general obligation bonds to the city of Los Angeles, for acquiring or developing affordable housing units. The proposition was introduced with the intention of housing the city’s estimated 69,144 people, a point-in-time count released by Los Angeles Homeless Services Authority (LAHSA), on 8th September 2022. HUD’s annual homelessness report (2020) ranked Los Angeles as the metro area with the second largest homeless population, only after New York.

Proposition HHH had set out to build 10,000 units of affordable housing within a ten-year timeframe. According to the Los Angeles Housing Department, 3,357 units of supportive housing have been built already and another 5,320 units are under construction. While HHH has made good progress, the rising costs of construction have been a persistent problem that threatens its continued success. In this article, we are taking a look at the challenges facing HHH and exploring the United to House L.A. ballot measure.

As Los Angeles continues to grapple with its homelessness crisis, several community groups came together to kick off a new grassroots movement last December which quickly gained popularity.

The United to House L.A. initiative was started by a coalition of non-profit organizations and community groups. Endorsed by over 50+ community groups, such as ACT-LA, LA Family Housing, California Community Foundation, Unite HERE, Local 11, Move LA, the Southern California Association of NonProfit Housing (SCANPH), and more. Their initiative is now on the November 2022 ballot measure. As the city awaits the results of whether this landmark initiative will pass or not, let’s take a deeper look into what the movement seeks to achieve.

A measure to fund tenant protections and affordable housing development

The ULA initiative levies a one-time tax on any property sale of $5 million or more in the city of Los Angeles. The measure reads, “the tax rate would be 4% of the consideration or value when the property transferred exceeds $5 million but is less than $10 million, and 5.5% when the property transferred is $10 million or more”. Considering only 3% of property sales in the city of LA from 2019 to early 2020 would be affected by a measure such as this, the group argues that their target is exclusively millionaires and billionaires. The program predicts that this one-time tax would raise an estimated $900 million a year to reduce homelessness, make housing more affordable, and protect low-income seniors from losing their homes.

The funds that would be generated through this program would be allocated primarily for affordable housing and supportive housing programs. It would fund the development, construction, acquisition, rehabilitation, and operation of housing. The program also aims to fund financial, educational, and other resources for low-income and other tenants at risk of homelessness, displacement, or eviction.

Innovative solutions and support for the homeless population

Can measure ULA learn from the challenges of prop HHH?

Looking back at the progress of HHH, there were a few persistent challenges that disrupted the project timelines. If funds from measure ULA are to be allocated more efficiently, it needs to take cognizance of the main challenges that prop HHH struggled with. Below are some of the major concerns that proposition HHH has been struggling with.

A challenge that was worsened by the pandemic, is the rising project costs of the HHH-funded units. To demonstrate this, let’s look at the HHH projects in construction and their costs, during the time of construction.

At the time of the city comptroller’s audit, there were 65 projects in construction through the LAHD/HHH pipeline, estimated to provide 4,205 housing units, 3,478 of which were to be supportive. The City awarded approximately $578 million in Proposition HHH loans for these projects—an average of approximately $137,000 per unit. As can be seen, the average cost per unit ($596,486) is much higher than what was estimated and allocated ($137,000) by the city’s lending agency. There has been an across-the-board increase in construction costs for HHH projects, understandably worsened by the COVID-19 crisis.

Critics of HHH also claimed that the estimated timelines of housing construction were not aligned with the urgency of the crisis. The city audit reviewed the timelines of projects that have been completed and also those in the pipeline and concluded the following.

At the time of the audit in August 2020, 15 projects had been completed and the average timeline for them was 3.4 years. The audit estimated the average timeline for the remaining projects in the pipeline, and it seems each of these projects might require up to 4.3 years on average to be ready for occupancy. This is a huge jump from the initially estimated project completion timeline of 2 years and will severely impact the capacity of the city to house the growing homeless population.

The report suggested that if the city can streamline its permitting and other processes, then a lot of projects in the development pipeline can be completed much more quicker. Currently, the challenges of being short-staffed and the red tape around a lot of these development permits make it difficult for lending agencies to quickly hand out the relevant permits to the developers. The process of underwriting, collecting due diligence, and closing the application can all be cumbersome and need to be streamlined and fastened so that projects in the development pipeline can start construction.

If ULA passes the ballot test in November, it will be more important than ever to improve its implementation. Hence, we at Builders Patch brainstormed some ideas and collated existing solutions in the market on how the development process can be streamlined and optimized for the development of more units in less time.

Considering rising project costs are a major deterrent to the development of affordable housing units, it is important to bring down costs by implementing innovative construction techniques. For one, considering alternative building materials such as bamboo, fly ash bricks, and Glass Fibre Reinforced Gypsum (GFRG) can bring down the cost of construction.

Another model that can greatly reduce the cost of housing development is pre-fabricated building solutions. For example, modular housing development startup Blokable has come up with the Blokable Building System, under which, each housing unit is a volumetric “Blok”. Each of these units is a standard component that can be stacked and assembled in multiple configurations. Manufacturing 95% of the building in the factory significantly reduces per-unit build times and costs. Not only are they lower cost than traditionally constructed units, but they are also more energy efficient.

Affordable housing today is built with a plethora of financing mechanisms. Federal and state low-income housing tax credits (LIHTC), government subsidies, and grants of land/leases from the city are a few examples of the long list of financing options for these projects. Each funding source insists on its underwriting procedures, financing fees, and timeline to deliver the funds and close the project. The underwriting process is holding up the final distribution of funds for what could be shovel-ready projects.

There is an urgent need to streamline the process so all participating lenders, investors, and funding partners can work using one unified platform. Simply standardizing the underwriting procedure, uncomplicated collection of due diligence, and centralizing communication across applications, often with multiple internal and external stakeholders, can make a huge difference. Not only does it save time and cost for the lending organization, but also ensures the lending process is up to speed and can keep up with the rising demand from developers to secure their funding at the earliest. A streamlined, efficient, and quick lending process will unencumber developers to line up more housing for financing quickly.

As creators of housing finance software, we at Builders Patch believe that there is a dire need to use technology to streamline repetitive and outdated methods of managing and financing projects. For instance, with our platform, the city will be able to streamline the process of collecting RFPs, issuing approvals, underwriting and financing for developers, and coordinating tasks and conversations across departments and stakeholders to at least double the speed of lining shovel-ready projects for construction.

ULA is a powerful grassroots housing movement, which if successful, might set off similar movements across the country. The progress made by HHH so far in Los Angeles will only be complemented and bolstered by the infusion of funds that the ULA measure seeks to generate. The city of Los Angeles is making strides toward alleviating its housing crisis, which has drawn national attention. We hope to see this ballot measure pass in November and are looking forward to assessing the impact that this measure is bound to have on the city’s housing challenges. If you support this cause and want to help out, you could also volunteer for Measure ULA or donate to their cause.

Read the first article of this series here.

LATEST ARTICLES
Did you get a chance to catch us at your nearest housing conference?
We've been busy attending multiple housing conferences this fall. Here is a brief update on our experiences and a sum of our main takeaways from these conferences.
Company Updates
Nov 3, 2022
Filling funding gaps: how state agencies are moving to meet a growing threat to affordable housing (NCSHA report) - summary
Key takeaways on the role of HFAs in filling unexpected funding gaps from the Washington Report by the National Council for State Housing Agencies.
Affordable Housing
Oct 18, 2022
Review of Proposition HHH and what to expect from the new United to House L.A. measure?
A new grassroots movement by homelessness and housing experts has been rapidly growing in LA, aiming at tackling the housing shortage and the homelessness crisis through a new measure, and by turning to innovative solutions in construction and development management.
Affordable Housing
Oct 14, 2022
All articles